Whether buying a second home, moving to Istanbul, or making an investment, it's crucial to understand the region's of Istanbul in order to make a healthy decision.

A good starting point to understand the locations of Istanbul is with this annotated map below: 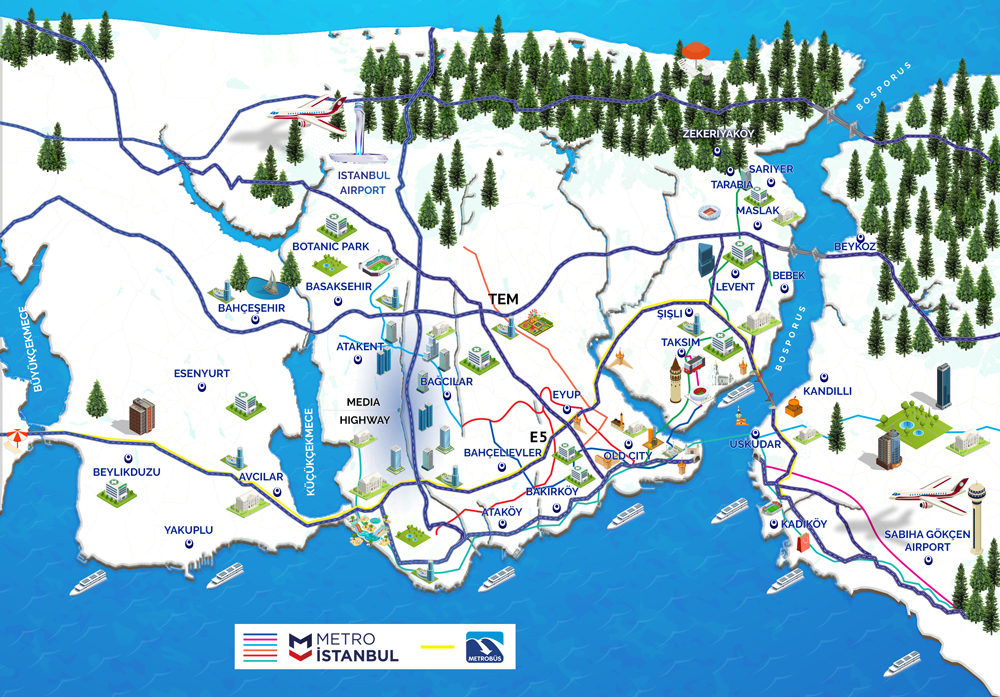 Since 2014, the majority of international buyers have invested in Esenyurt, Beylikduzu, and lately, Basaksehir. These are suburbs of Istanbul, and were heavily marketed by international agents as a new Istanbul. The reality is that developers in this region paid agents 10-15% in commission. This commission is added to the price, meaning investors are overpaying to begin with, and are investing in a region that has an oversupply of apartments, yet not enough local Turkish demand to meet this supply. The difficulty of access to the city centre, the low demographics and the lack of government investment on infrastructure has meant Turkish investors avoided these regions en masse. Hence international buyers have struggled to resell investments in these regions.

2019 passed by as a bad year for Turkish investors. With interest rates at an all time high, nearly 25%, investors preferred savings accounts. This caused a slowdown in local demand, ensuring a marked decrease in prices. In July 2019, with a change in management of the Turkish Central Bank, interest rates were reduced drastically from 22.5% to 18.25%. A further reduction came in November to 12.5%. This released pent up demand in the market, causing an incredible spike in sales, and with this an almost 20% rise in prices in the space of two months.

Esenyurt and Beylikduzu - suburbs of Istanbul

These two areas suffer from two very important problems - Poorly planned infrastructure, with no plans for improvements; and over construction, with too many permits given by the local municipalities. This combines to form an oversupply for two districts where most professional middle class Turks do not want to live. The poorly planned infrastructure and lack of public transport has caused a bottleneck in traffic at the Kucukcekmece lake. The traffic here at peak times can cause waits of over one hour.

The serviced apartment is the safest concept in this region. This is where a management team will be within the complex, and this is generally available on projects built by major developers. The smaller developer does not have the experience or know how to provide this type of service - this does not mean small development, but the type of developer that set up fairly recently and would not have the knowhow. We strongly recommend against an investment in this region. However if there is a target budget that only suits this region, then we would consider the complexes that fit our investment criteria 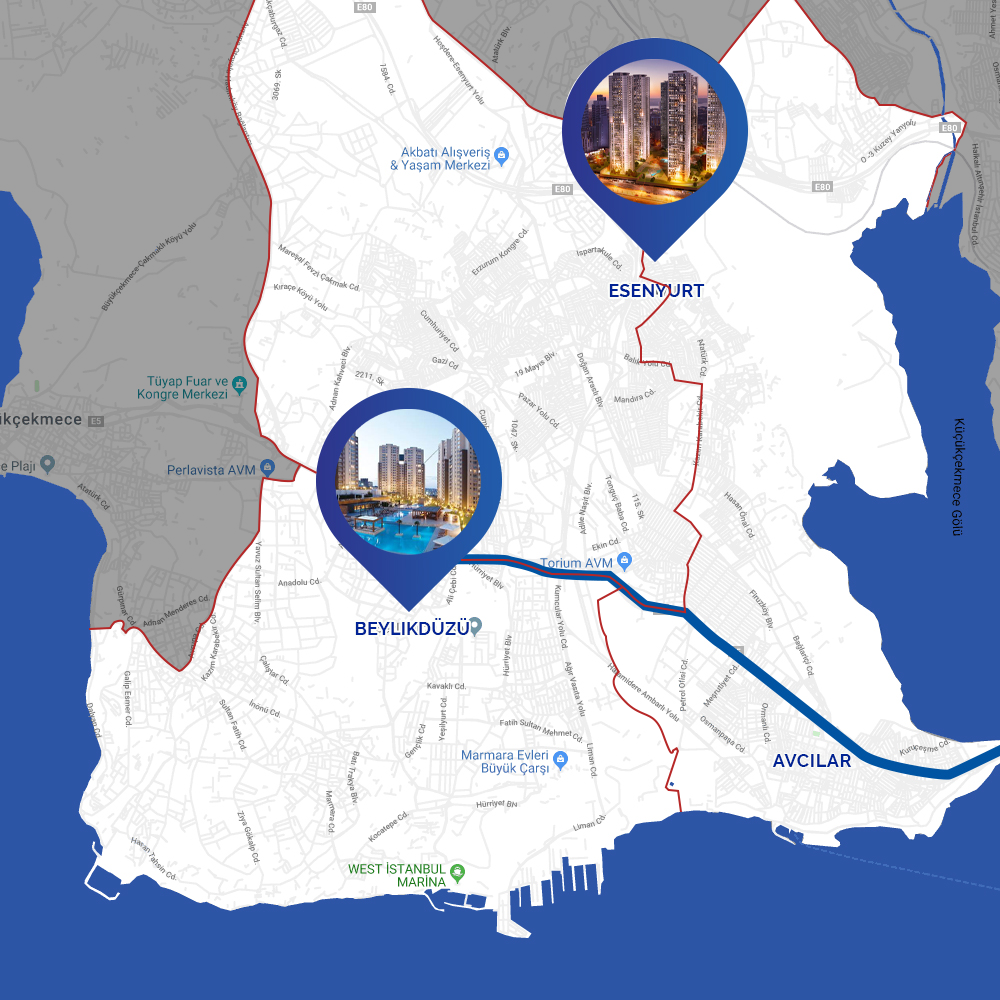 Whilst these regions are okay for vacation homes, as an investment - best to avoid.

Istanbul’s premier business district starts in Sisli (pronounced Shishli) and extends North to Mecidiyekoy, Levent, 4. Levent and ending in Maslak. Sisli is prime city centre and in exceptionally high demand for residential and commercial space. Development in this region is rare and usually quite expensive as vacant land no longer exists. 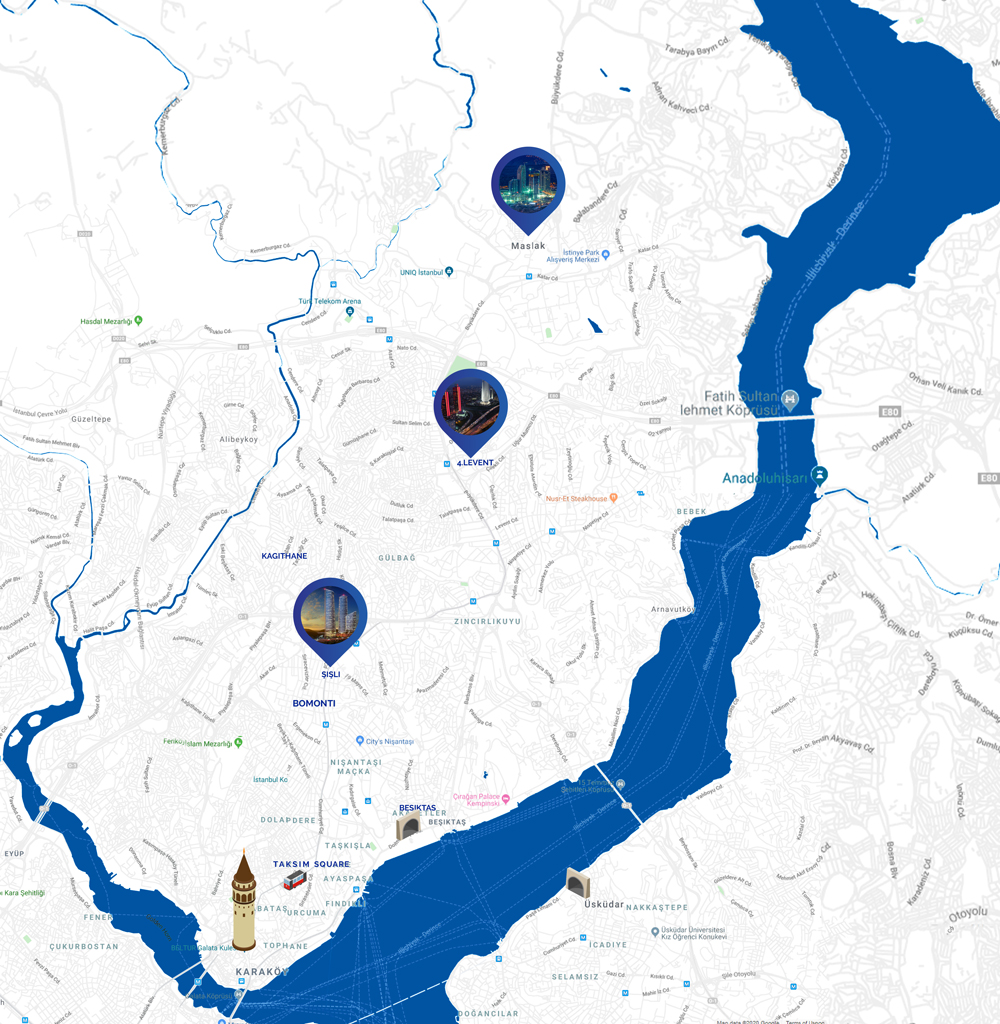 Bomonti is a region which was a ghetto just five years ago. Today, it is an elite residential region, with skyscrapers like Anthill, Divan, and Bomonti Hilton (the largest Hilton in Europe). The residential towers average in excess of $4,000 per square metre.

Bomonti's popularity gained with the construction of two road tunnels, one which leads directly to Besiktas, and the other leads up to Kagithane. Two very important tunnels. In addition, Taksim is 9 minutes away, Nisantasi (a very elite area) is a 10 minute walk away, the Taksim metro (M2) is a five minute walk. Bomonti today is an important, yet still growing region. 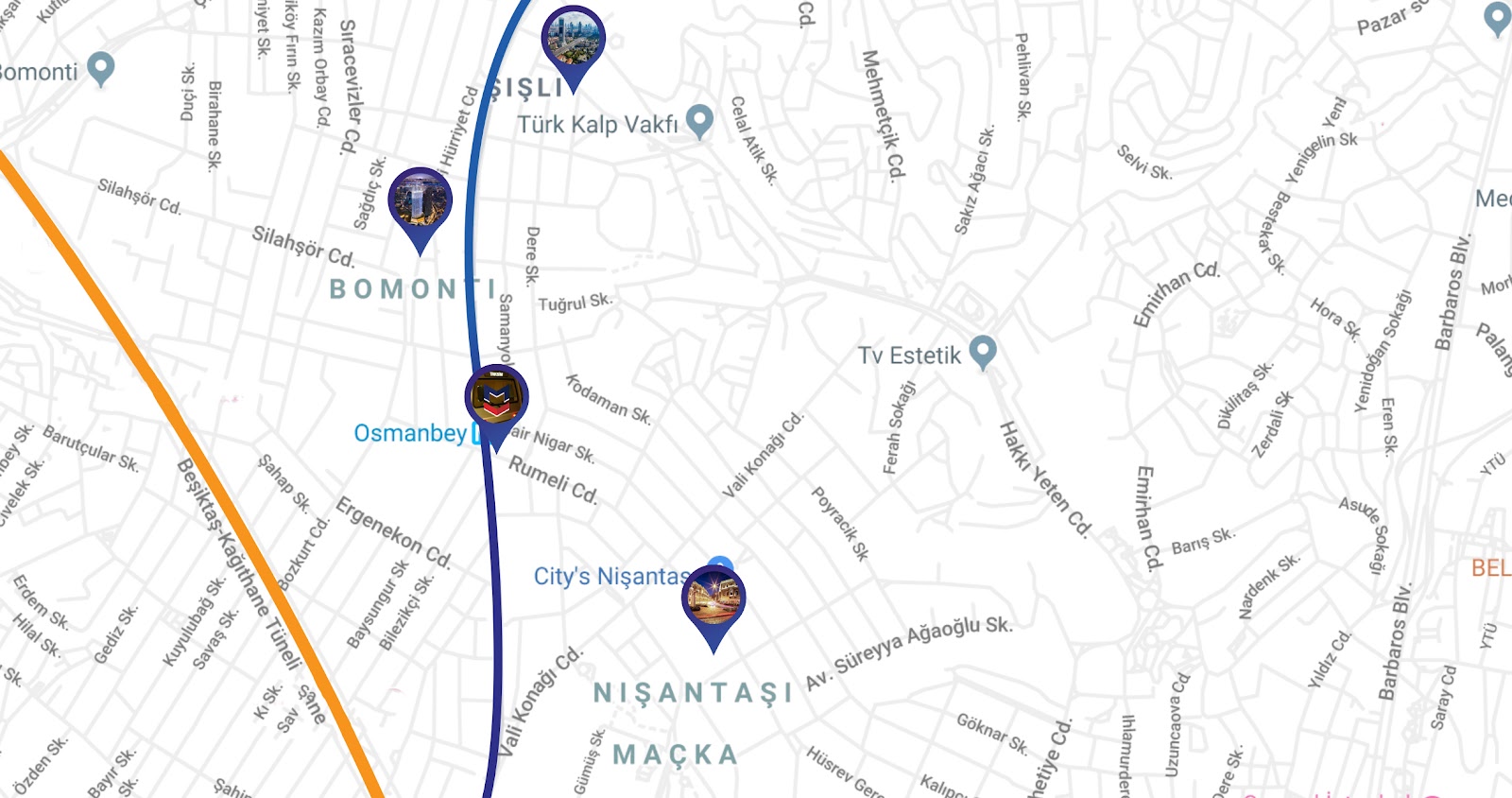 Maslak, Levent and 4. Levent regions are exceptionally expensive and primarily made up of office space. Buyukdere Avenue is the main boulevard and is lined with 40-60 storey skyscrapers. This prohibitively expensive region can no longer be seen as ripe for investment. The M2 (Taksim) metro line runs directly under this boulevard. Directly behind this front line is the surprisingly underdeveloped Kagithane region.

Whilst most people know Seyrantepe due to the famous mall, most people are not aware of it being called Seyrantepe. International buyers are miscommonly told this region to be Maslak. These two zones are gradually merging, along the Cenderre river banks. Starting in Seyrantepe, incredible developments have cropped up along the river, working its way south towards the Halic river. Whilst prices have topped out in Seyrantepe, moving further south offers an opportunity for real value.

With the new M7 metro line opening in Q2 2020, the pace of development will quicken once the potential of the new line is realised. The M7 metro line runs east from this region into the city centre at Sisli, and terminating at the Bosphorous in Besiktas. This line is of crucial importance to Istanbul as it will be the first East to West metro line link for the city centre.

The new Airport is also easy to access from this region, with a direct highway link from Kagithane to the airport - the D020. The airport is to be served by a metro line due to open next year, and with a station in Kagithane.

GOP and Eyup are traditional working class regions providing easy vehicular access to the city centre of Sisli. Both suffer from low quality housing stock from the rapid expansion of Istanbul in the 60s and 70s. All of this stock is not earthquake proof and is in need of urgent replacement. Hence the government focus in this area is combining parcels of land to form larger plots, and thereby creating high rise developments. In GOP this has primarily occurred near the E6 (TEM) highway. In Eyup this has happened sporadically in and around the new M7 metro stations. 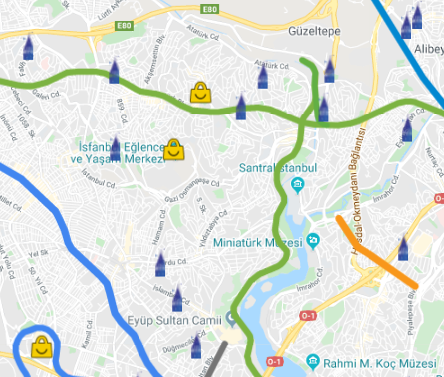 In both regions, it is highly recommended to be near the new metro stations or with easy access to the main routes. There has also been much development around the Hasdal exchange of the E6 highway. This is driven by the new three-level tunnel, a direct road and metro tunnel which links the region to the Anatolian side uninterrupted.

The coastal route provides enticing sea views as well as excellent transport links to all parts of Istanbul. The region also provides a fantastic lifestyle to residents with excellent and varied amenities of all kinds. These regions are prime for the upper and middle classes.

The front line has seen heavy development of mega compounds - these are without doubts future landmarks of Istanbulk. These provide full uninterrupted sea views across the Marmara sea, the Prince’s islands, and across the historic peninsula.  They are once in a generation developments, with no further land remaining for compounds of these kinds.

The uber modern Marmaray train line provides high speed access to all parts of Istanbul, and runs without interruption under the Bosphorous, the Anatolian side, and all the way to Ankara as a high speed trainline. This has made these regions even more attractive to frustrated commuters.

Despite being in the upper bracket in terms of price, these developments are prime for investment. They will be easy to rent, and with strong demand from the local and international market, the resale value will always be there. 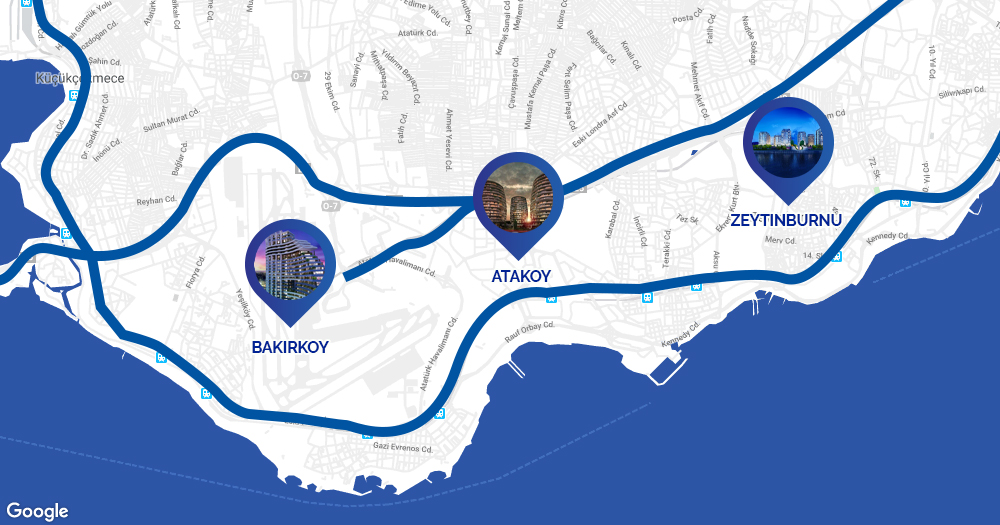 The crossroads of Istanbul - Bahcelievler and Topkapi

These regions are always attractive to the middle classes of Istanbul. Providing easy access to the E5 means multiple transport options to all parts of the city, but most importantly to the city centre and business district. The region is traditionally heavily dense, with narrow streets, and lack of underground parking the main issues.

This changed over the last five years, with old warehouses and factories moving to the suburbs of Istanbul, large compounds have replaced them. This has driven growth in the area, with prices remaining reasonable considering the location. 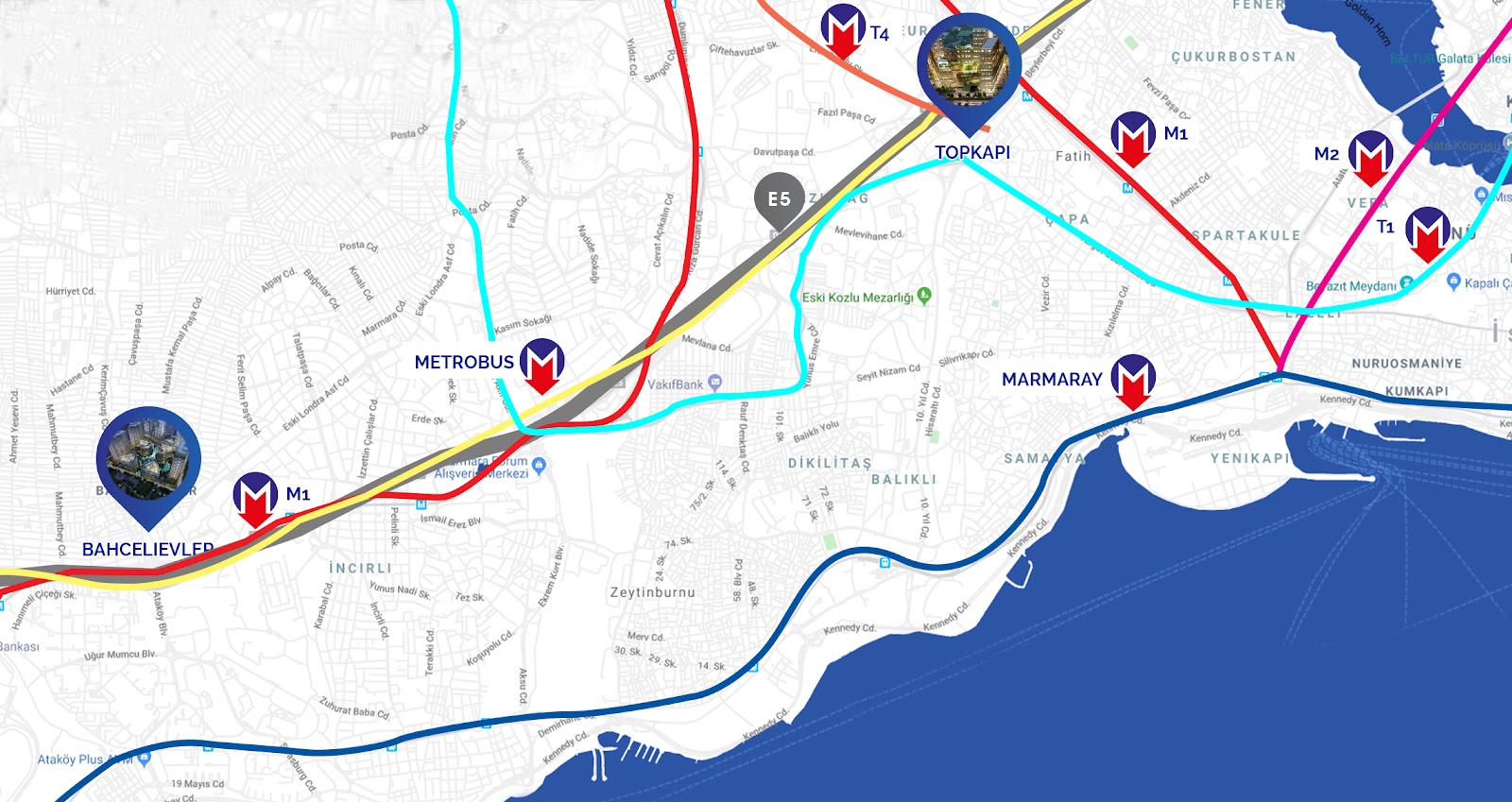 The Media Highway (Basin Express in Turkish) is the highway which connects Ataturk Airport, the E5 highway, and the E6 highway. Here is a detailed annotated map of the region: 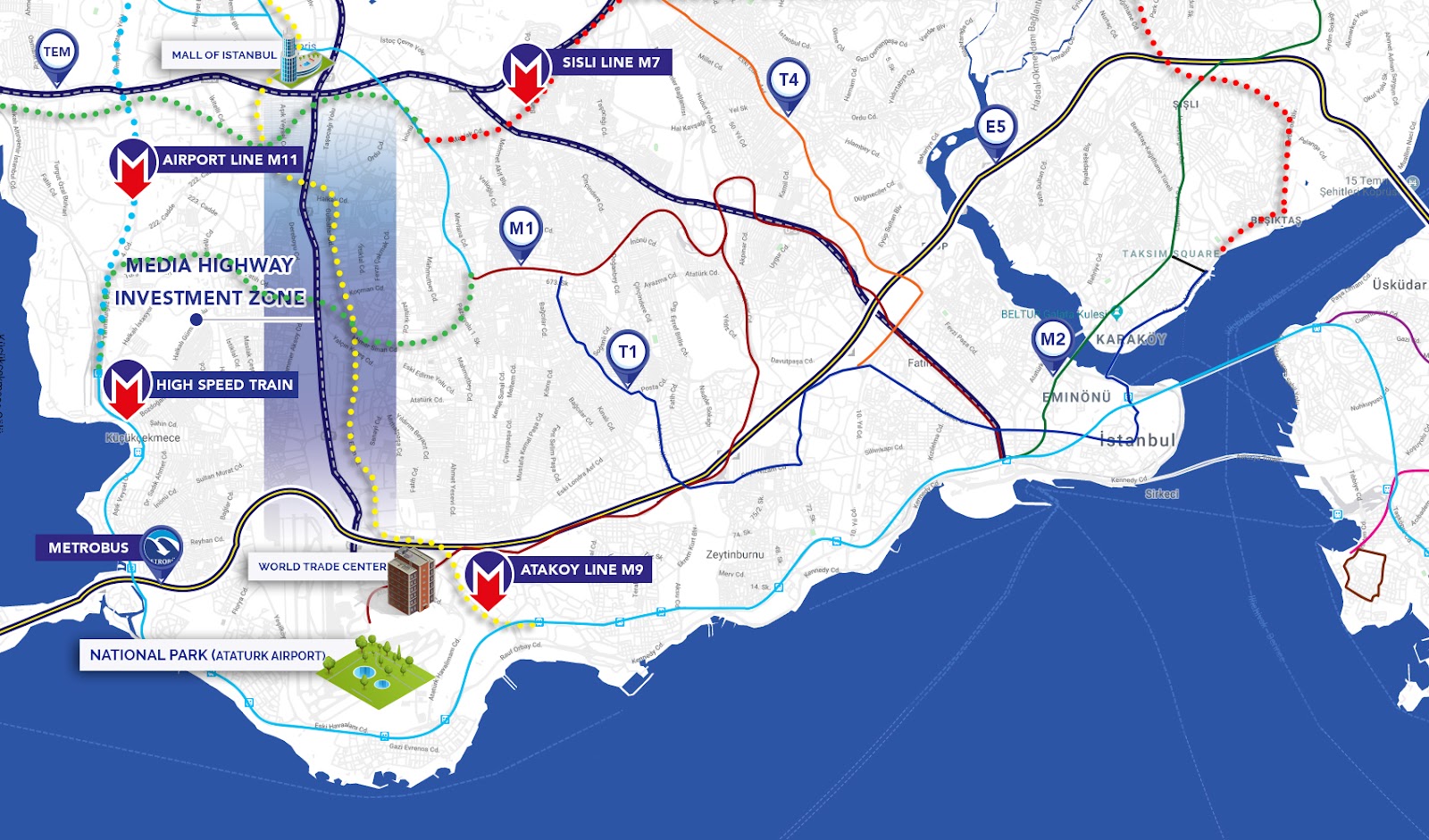 It is one of Istanbul's most important highways, and today it is the focus of the government's plans for a new business district. The current business district (as described above) is over capacity, and is exceptionally busy. Hence Istanbul needs to develop new commercial districts. The government has two plans, one of which is Media Highway, the other is Atasehir on the Anatolian side, which is now well known as Istanbul’s financial district.

Key facts about this crucial region: 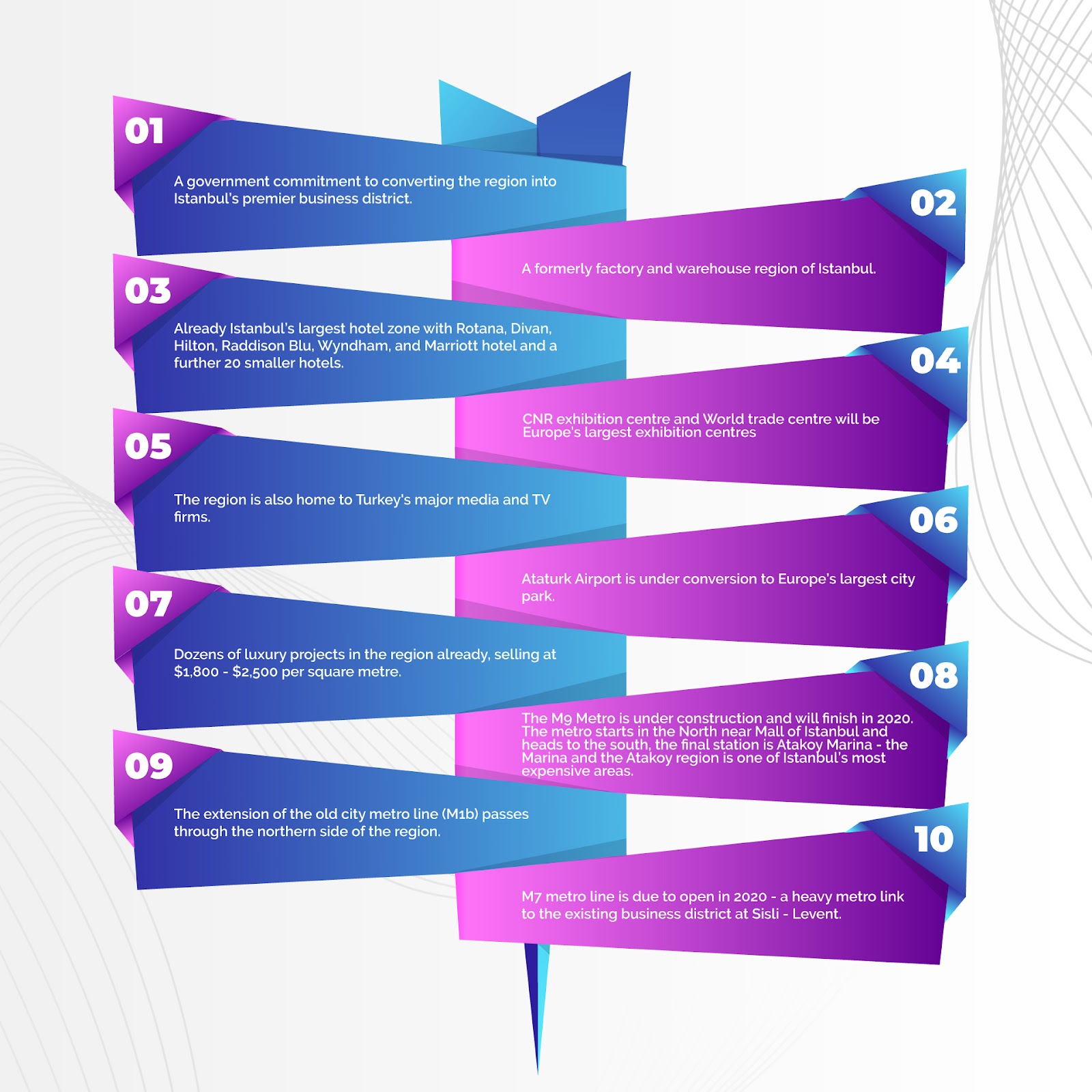 Media Highway currently has around 20 developments from the cheap to the expensive, under construction to recently completed. Depending on the precise location within the zone, the price can vary from $1800 per square metre to $2500 per square metre.

These two regions are investor favourites, but the important attributes of location, early phase of construction, and brand name builder, are very important here. This combination ensures resales are always fast, for a quick exit route no matter what the market conditions. The cheaper options will never provide a decent return, and resales take traditionally longer in my experience. In recent research, we found that return on investment levels reached 30 years, making it much more logical to rent in the region then buy.

Basaksehir and Bahcesehir are the closest satellite towns to the new airport, with a government objective of growing both in to a population of one million plus. Parallel to this plan is to grow it with a master-plan - hence the broken thinking of the past of building first, bringing infrastructure later, is not in place here. Basaksehir is home to one of Istanbul's biggest malls (Mall of Istanbul) and Istanbul's biggest state hospital (3,000 beds). The metro linking the region to the city centre is already operational with construction for expansion already having started. Bahcesehir also has a metro construction linking it to the city centre at Sisli. These are all large scale public and private investments adding up to billions of dollars.

Ready to use commercial stores in Avcilar